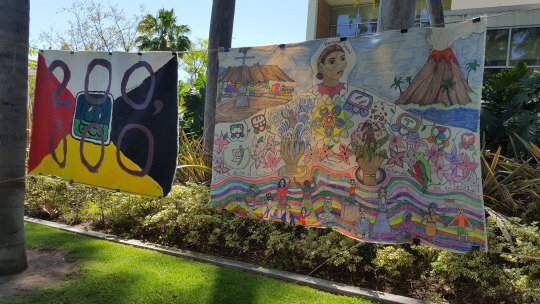 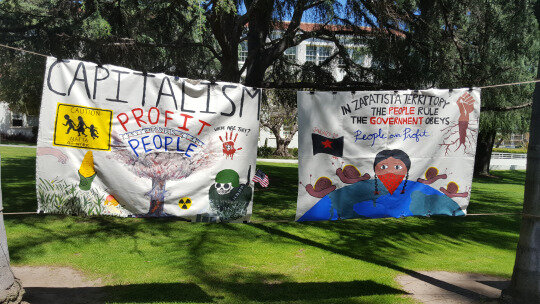 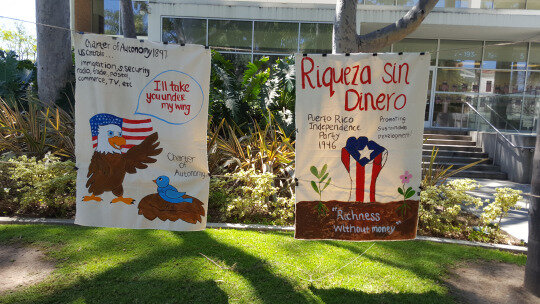 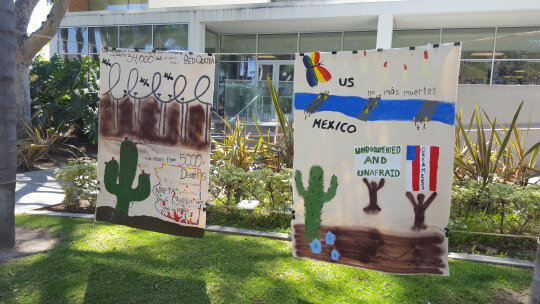 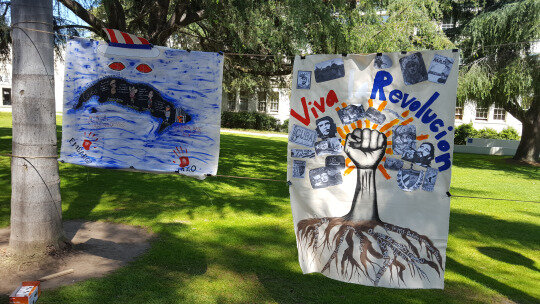 This project was the culmination of LMU’s 2015-2016 Alternative Breaks Program, where students have an opportunity to participate in immersive, educational social justice oriented trips to different places around the globe. During a re-orientation meeting upon students’ return, BT Trainer Chelsea Byers led a 2-hour workshop on “Art as a Tool for Social Change,” where she spoke to the role of art in social movements and facilitated the development of a plan to build a collective art piece on campus. This project sought to embody the intersectional oppressions of issues from healthcare, food justice, and sustainability to racial justice, mass incarceration, and immigration.

“Art is not only a mirror held up to reality but a hammer with which to shape it.” ― Bertolt Brecht

Students devised a plan to use two canvases side by side, to demonstrate oppressive forces at work for their trips’ issue and a radical new future beckoned by creative resistance and struggle. The results were collected on April 15th and Chelsea went back to campus to support the installation. The results were incredible.

“We cannot live without art for it’s the most important dimension of creating change. It’s central to the imagining of new radical possibilities for our future.” Angela Davis

This exhibit is a collective art piece displaying the student’s learnings and experiences on their alternative breaks trip. In collaboration with Beautiful Trouble and CODEPINK, students brainstormed to develop an art piece that would uncover the connections between the social justice issues of immigration, public health, mass incarceration, food justice, sustainability, racial justice, land rights, indigenous issues, and community empowerment. On one side, students are displaying the different oppressive forces that have led to the degradation of our communities. We know whenever there is oppression there is also resistance. On the other side, students are displaying examples of resistance, and imagining a more equitable, just and healthy world possible of mutual respect and dignity for all living things.

While some these experiences were in an international context, art allows students to strip down the borders and see the issues as they operate in our own local communities.

Making trouble at the conventions